On Friday 30th September 2016 Holly Wratt-Groeneweg from Room 1 and Kate Taylor from Room 7 went to the Gold Coast on an Australian touch rugby development tour.

When we arrived in Brisbane we met our team at the airport, then hopped into a mini van and raced off to Southport, Gold Coast.

The first day it was 32 degrees and boiling.  We didn’t have any games that day but we still had a successful training.

The next day we woke up bright and early and played our first game against the Gold Coast under 12 team and won 3-2.  Later on that afternoon we had played against Galaxy and lost 7-6.

Over the next two days we played another four games and won two, drew one and lost one, we also went shopping both days and spent up big.

On the Wednesday we got up at 7am and we were getting ready to go to Aqua Splash at 9am, we had a blast there.

Fast forward to Friday and we were getting ready to go home. There was a sad mood in the air, but we had an amazing time and we are grateful that we got the chance to go.

Written by Holly and Kate 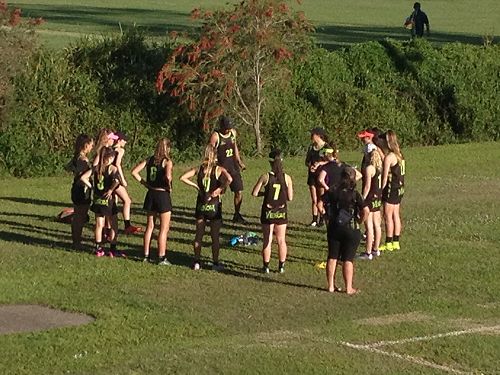