Kayla Leslie plays for Canterbury Hockey. They played for the national Collier Trophy in Tauranga during the holidays and were placed 1st overall. She played a total of seven games and they had only two points scored against them. In the final they played Auckland, successfully winning 2-0.

Q: What was the most challenging game?

A: For me the most challenging game was the semi final because in this game my coach only played me, and another player for about 5 out of 50 minutes. We struggled a lot with this because this had never happened to either of us before and we were quite surprised and also very disappointed by it.

Q: Were you nervous going into your first game, and why?

A: Everyone was nervous. It was our first game at a national tournament that we wanted to do well in. We felt a lot of pressure as we are Canterbury and we definitely wanted to do better than the team the year before who finished 7th.

Q: What was the most exciting part of your trip?

A: The most exciting part of the trip for me was of course being in the final and then winning the final. We had been through so much as a team and it felt so good to finish off the week with such a good outcome. Another thing I loved doing was all the challenges our coach designed for us when weren't playing, such as photo scavenger hunts around town, pageants and sandcastle competitions.

Q: What made you play Hockey?

A: My family has always been heavily involved in hockey and I basically grew up at the hockey turf so I started playing because I was sick of going to hockey to watch my sister play and my Mum or Dad coach.

Q: How long have you been playing Hockey for?

Q: Are you happy with what you achieved and why?

A: I'm definitely happy with what my team and I achieved. We all played a massive role in the team and we couldn't have done it without anyone. I still don't think that we can really believe that we are national champions but i'm so proud of everyone that was in the team and I know all the girls feel the same. 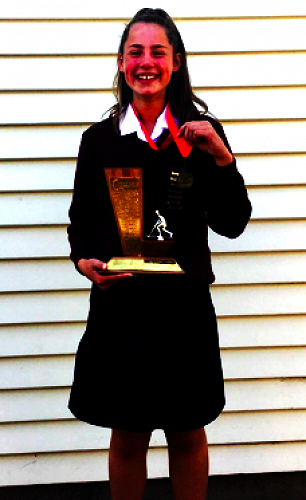