Our three football teams are competing hard in the Intermediate Sport Competition at Hagley Park each Tuesday. Our boys teams are coached by Mr Leith, Mr Pitt and our girls team by Miss Mordue. Catch up on last week's reports from our captains.

Casebrook A vs Heaton A

In the first half it was pretty even until we finished off a goal from a cross. We started to dominate and didn't quite finish off our chances. This gave Heaton a chance to get back into the game if they scored a goal. They scored. Half time came with the scores equal at 1-1. The second half started and Heaton scored an early goal. The score stayed 2-1 for a while until a great cross by Ryan Hann came in and Ben Smith smacked in a half volley from just inside the box, hitting the post and deflecting in. We were back in the game. Heaton came back strong, and got a well finished goal. Then a runaway goal sealed the game and gave us no chance. We had one more chance but couldn't score. The game finished in a 4-2 loss. Player of the match was Hugh Hutchinson
Match report written by Caleb Cottom (capt.)

Casebrook B vs Shirley A (19th May)

The team could have played better in the first half, we were kicking the ball away and not moving into space. But that all changed in the second half. If it wasn’t for Mr Pitt's inspiring team talk to motivate us and get our heads in the game we might not have pulled off our 3-2 win. The team were controlling the ball and waiting until there was an option to pass and if there were no options they were running with the ball and waiting till an opportunity to pass came up. Player of the match was Petrum Hassanian.

Unfortunately this week we let a 2 goal advantage slip and ended with a 3–3 draw. If the game had gone for another 5 minutes we could have managed another goal. There were some good performances in the first half however the second half saw us drop our standard to let the other team back in the game. We didn’t track back very well and this meant the opposition had more numbers on attack and they were able to take advantage of this and score quickly. Player of the match this week was Caleb Parsons. 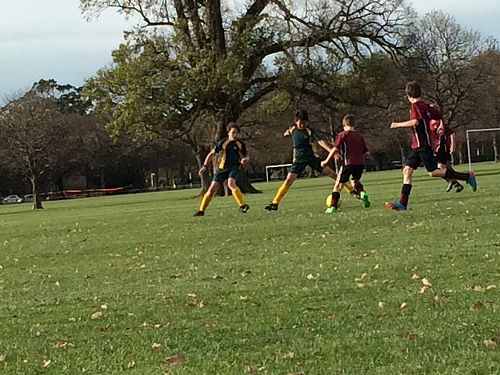